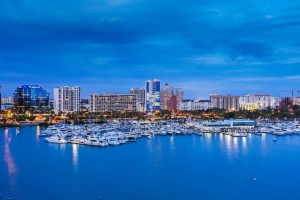 The Sarasota Real Estate Market suffered a considerable impact from many fewer business days in September as a result of both Hurricane Irma and the Labor Day holiday.  Though September is typically a softer month than others throughout the year, when comparing sales to the same month last year, the area saw an 18.5% decline in closings.  The Realtor Association of Sarasota and Manatee calculated that the region had 20% fewer business days compared to other months this year.

Despite the substantial decrease in number of units sold in the Sarasota Real Estate Market, condo sales dollar volume was just 2% behind last year, and single-family was 13.5% behind prior year.  At the same time sales weakened, prices maintained their climb with single-family home prices growing 8.4% and condominiums up 11.2%.

With homeowners focused on hurricane preparations, evacuation plans, and eventual clean-up, significant business disruptions caused by loss of power and technology, need for re-inspections of homes under contract after the storm passed, and general angst not only caused sales to lag, but also new listings and pending contracts to be impacted.  Single-family listings were almost 37% fewer than previous year and condos saw 18% less units come to market.

Current inventories of single-family homes and condominiums in the Sarasota Real Estate market are at the lowest levels in more than a year.  Homeowners who were unable to get their properties listed in September will hopefully go forward with their plans to sell and help to restock our now tight supply.

Pending sales is one of our best forward looking indicators.  In September new contracts signed were almost 30% behind last year.  However, it is important to note that while this may affect sales in the next month or two, demand has not waned and those same buyers are still in the market for properties, so I do not expect future sales to fall measurably as a result of the hurricane.

Florida and Texas represent nearly 20% of all real estate sales each month, so with the states so severely impacted by Harvey and Irma, both August and September saw total U.S. sales slide.  The National Association of Realtors reported that September inventory and pending sales nationwide also declined, likely attributable to the storms.

Looking at the whole of The Sarasota Real Estate Market and comparing to national and state data, the following are some of the key points that I assimilated from the many resources I review monthly.

Homebuilders remain steadfast in their confidence that the market for newly built homes will continue to be strong.  Though material and labor shortages exist and costs are rising, a recent survey by the National Association of Homebuilders indicated developers believe they can maintain their pace of building and deliver much needed new inventory to market.

A recent survey of more than 100 real estate experts, economists and market strategists also reflected sentiments of a very healthy housing market.  They project a strong finish to 2017, sales increase in 2018 of more than 5%, and price increases of about 6% on the national stage.  Over the next five years the same group expects national average home value appreciation to grow 3.6% annually and cumulative appreciation for homes of 18.4%

October activity in my business has been as strong as I can remember in recent years.  A high level of activity from eager buyers and many new sellers give me confidence that in the season ahead the Sarasota Real Estate Market will continue this year’s pattern of sales and price growth.

If this is your time to sell or buy a new home or condominium, give me a call and let me help you achieve your real estate objectives.

View all of Michael’s Listings HERE