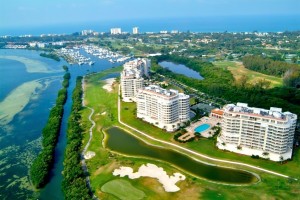 The whole of the Sarasota Real Estate Market continues to experience measured growth in sales, price appreciation and generally stable inventory conditions. But it is in the luxury tier – properties for sale over $1,000,000 – where activity has been consistently showing year-over-year growth of some significance. Subscribers to my newsletter are aware that the majority of my transactions are in this category, so I do watch and analyze it more than other price points. It has been some time since I focused one of my monthly reports on this segment, so in light of the unique aspects of this tier, I thought it was deserving of my April highlight.

What has been especially noteworthy in the Sarasota Real Estate Market this year is the completion of several spectacular new condominium projects, which have begun welcoming residents over the last six months. These developments, as well as other existing luxury condo residences had an increase in sales of more than 95% in the first four months of the year, when compared to the same period in 2017.  By comparison, single family homes in the over $1 million category increased 24% over prior year.

Another remarkable piece of data is in pending sales, those properties put under contract in the month but not yet closed. According to Trendgraphix, million dollar and above condominiums have shown consistently high growth over prior year with an average of 77% more pending contracts signed each month in 2018 compared to last year. Keeping an eye on pending contracts is key to being able to project sales activity in the 1-3 months ahead.

The luxury condo market could be said to have been “disrupted” by the addition of the new buildings, but with others currently under construction and several more in various stages of design and development, I believe the trends that we have seen thus far in 2018 are likely to become the norm over the next couple of years. There has been great pent-up demand from both in-market and out-of-market buyers wanting to buy new construction, and with years of no new product coming to market, I believe there is great promise for luxury condo absorption.

In-market demand is especially interesting as I am finding a desire from current residents on the keys to want to relocate to downtown Sarasota and some new east County developments. In addition, there are many “baby-boomer” local clients looking for the lower-maintenance, privacy and security, and especially luxury-hotel-like services and amenities of today’s condominiums, instead of maintaining a large single-family home.

When looking at where the majority of our non-residents are coming from – the northeastern U.S., as well as Canada and the U.K., Sarasota Real Estate is a great value/investment in comparison to their home communities, with an incredible bonus of the extraordinary Sarasota lifestyle. Luxury buyers are no longer just seeking prime locations, lifestyle has become a primary factor in where to make their investments. The ultra-wealthy have also become increasingly mobile with easy global travel and tech advances allowing them to work remotely, allowing them to spend more time in their preferred location.

The Federal Reserve released a recent report identifying that there are 12.6 million U.S. households that rank in the nation’s top 10% level of wealth, defined as having more than $1.2 million in total assets. Market analysts used this information to assert that there are more potential wealthy buyers than ever before.

One challenge that exists for us in the Sarasota Real Estate Market is that buyers of premium properties typically have the benefit of time and money to wait to find the perfect home. On the other side of the coin, they are often not under pressure to have to sell another home before closing on a new one. So will these wealthy prospects wait for the yet to be completed new buildings to be developed, or will they want to take advantage of the excellent existing condos that have been put on the market during the last year but have not yet been sold, and choose to renovate so that they can move sooner rather than later?

For a snapshot of data from the Sarasota Real Estate Market as it compares to previous year and also state and national statistics, see below:

Statistics on new home construction in the Sarasota Real Estate Market is difficult to obtain, but one recent report noted that more than 900 new home starts in 2017 occurred in Lakewood Ranch alone. I drove through Lakewood Ranch this week to visit some of the new communities underway and continue to me amazed at the seemingly endless new home building. Add Palmer Ranch, The West Villages and other planned communities, along with homebuilder confidence being near an all-time high, and it appears that the new inventory stream will help to maintain a steady balance between supply and demand.

Sarasota has been dubbed a “lifestyle market” where beach, cultural arts and entertainment, culinary offerings, golf and other sports activities are strong influencers for buyers. While our region used to be known as a second home market, we are evolving to a more primary market, not only for the lifestyle aspects, but also for its relative value where buyers can enjoy more space and luxury design elements for their investment.

Consumer confidence remains quite high as a result of a strong jobs market and healthy economy. There appears to be buyer resiliency with little effect on demand from rising interest rates and the prospect of additional increases expected this year. Demand from buyers interested in the Sarasota Real Estate Market is still outpacing supply in virtually all price points and housing segments. All of these market fundamentals suggest that our region will continue its steady expansion.

Economists have estimated that more than 1,000 people move to Florida every day. With Sarasota’s unique lifestyle attributes and affordability when compared to many other coastal communities, it appears that without a significant global geopolitical or other unforeseeable disruption, our region is poised to maintain a healthy pace of sales and price growth, and also inventory balance for the year ahead.

Having assisted clients in the region for more than 35 years, I have the knowledge and experience to guide my customers through the labyrinth of searching for or marketing and selling a property in a relaxed and rewarding manner.

As always, I look forward to serving you, your family and friends with their real estate needs.