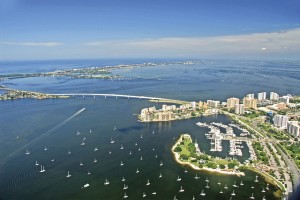 With virtually every morsel of January’s Sarasota Real Estate market data reported and analyzed, it appears that our region is poised for a peak selling season that would make both sellers and buyers feel confident that this is a great time to be in the game.  Inventory is rising, creating better balance between supply and demand; sales in January exceeded last year by a healthy margin; pending sales continued to maintain their stride; average number of days from listing to sale compressed further; median sale prices are still increasing; and inventory remains in a relatively balanced condition.  While some statistics are not escalating at the enormous pace of last year, the moderating yet consistently improving market is just what we need to keep our region on a long-term upward trend.

New listings in Sarasota County are up 10.6% just since December, which is a 32-month high and indicative of an improving market. In a recovering market, such as we have been experiencing, sellers who have been on the sidelines waiting to list feel it is time to get the property on the market to take advantage of the recent increases in prices, and even though available inventory has risen it is still significantly lower than a couple years ago.

Inventory levels are 30% higher than the recent low point in July 2013, but when compared to the height of the recession, inventory was 47% higher than it is now.  In fact, the market gauge – months of inventory – has not been as low as it is today since 1998.  Despite the addition of new listings, as has been widely reported, our market currently has 5.6 months of inventory, a level considered to still be below equilibrium.

As mentioned previously, there is pent-up demand for new construction.  Nationally, new home sales were most active last month boosting number of units sold by almost 10%.  The Florida Realtors Association indicated that statewide sales of single-family homes was up 10.2% compared to prior year and condo sales increased just over 9%.  When “distressed” properties are removed from the mix, an increase in year-over-year sales of 20.4% for single-family properties and 16.9% for condos were recorded.

In Sarasota, the January 2014 closed sales were up 10% from the same month last year.  The total sales in Sarasota County for all of 2013 were 11,184, the second highest in history with 2004 being the highest during the bubble years of 2003 – 2005. There were 7,453 single family home sales and 3,371 condos sold. The January sales, along with higher traffic from prospective buyers, an expected higher than normal tourist season ahead, and a fair pace of pending sales recorded in January are good indicators that we are on pace to surpass the 2013 total this year.

Distressed properties are still an important statistic to monitor, and sales of those properties in January represented just under 25% of the closed sales, significantly lower than the 50% level experienced in 2011.

The average number of days from the date of listing to closing has been falling consistently this last year.  The trend continued into January with that period compressing almost 15% compared to the same time last year.  Statewide that figure is lower, estimated to be closer to 7%, further showing that demand for Sarasota Real Estate is strong.

The Sarasota County market continues to see measurable price appreciation.  Median sales prices in our region for single-family homes have increased 21.3% and condos 17.1% from one year ago. While this number may seem considerable, it is actually a relatively modest rise in median prices indicating a healthy market, in contrast to an unsustainable spike being experienced month after month as was seen in the run-up years of 2004-2006.  As a comparison, national median sales prices were just 12% over prior year, and in Florida, single-family home prices escalated 12% and condominiums up 16.9%.

A recent study by Zillow, surveying more than 100 industry experts and strategists, found a projection of price increases nationwide to be 4.5% in 2014, which is still greater than historical averages that typically run closer to 3%.

The Sarasota Real Estate Market is also holding steady on sold vs. list price at about 90%.  I believe that this reflects sellers understanding “right-pricing” and avoiding the urge to overprice in this recovering market, as well as sellers wanting to expedite their sale to allow them the upgrade, relocation or change in lifestyle they are looking for.

My opinion is that our increasing Sarasota Real Estate Market prices will continue a steady climb and result in consistent year-over-year growth through the year, with obvious escalation during the peak spring season and moderation as the year progresses.

I would like to once again thank my past and current clients, as well as the many readers of my monthly report who show their confidence in me by sending me an extraordinary flow of referrals, for allowing me to serve you.  This last year, even though it was one of recovery, was active!

I continue to be proud to have achieved a Top-20 Sales Producer position in the Sarasota-Manatee region, which has more than 5000 registered real estate agents. It is my hope that these results are evidence of the professionalism that I bring to each transaction, experience in the market, knowledge of marketplace trends and developments, and individual attention to each of my buying and selling clients to understand their unique needs and expectations.  It would be my distinct honor to assist you, family, friends or acquaintances with their next Sarasota Real Estate transaction!

The following statistical data is provided through the Sarasota Association of Realtors for properties throughout Sarasota County. The table summarizes what happened in each price segment. The Sold, Pending Sale and Listed columns are sales and new listings for the month of the report, and the Pending Total and Listed Total are the current totals of each. YTD (Year to Date).