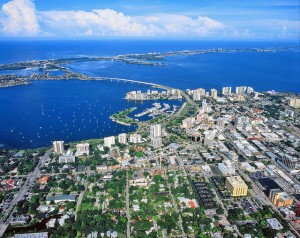 The Sarasota Real Estate Market continues to show signs of being more like a long distance runner than a sprinter.  The consistent growth month-to-month and compared to previous year is impressive.  The year has seen few spikes in sales, price, inventory and other indicators, but has seen steady improvement in all areas that I monitor to determine the market’s stability and sustainability.  October data is just in and it presents remarkable results.

Across the west coast of Florida sales were strong.  While the fall months can often be somewhat unexceptional, this year was anything but.

Contracts signed but not yet closed for Sarasota’s Real Estate Market also showed improvement over prior years.

Housing prices in Sarasota have maintained a healthy growth pattern and, according to data collected by Trendgraphix, every month over the last year saw price increases over prior year.  The steady and moderate pace of rising prices is contributing to the overall market strength.

The number of new homes and condominiums entering the market is impressive, but still behind demand.  While cranes can be seen all over the region and land is cleared and new home starts are up 15% over last year at this time, labor supply and cost and prices for building materials are rising, which are keeping the building market on a slower trajectory and demand for new product.

Real Estate Market analysis and financial experts continue to be bullish on the expanding economy and homeowner rising equity, which will help Sarasota to see a strong finish to 2014 and a peak selling season ahead that may push our region to more record-setting sales levels.

Though much of my business occurs in the luxury level where many buyers are not as affected by interest rates, I believe that even these cash-rich buyers will be encouraged to take advantage of the generation-low rates.  Based on the buyers that I have been working with over the last several months, I believe that the number of “opportunistic buyers” in our region are being replaced by very serious buyers and sellers who are making life and family decisions on homes that they plan to enjoy for many years to come.

As we approach the end of the year, and I reflect on the long road of recovery that we have traveled, I feel confident in saying that the path we are on is one of sensible and sustainable growth.  The Sarasota Real Estate Market is not only very healthy, but also in a position to prosper despite the ever-changing economic climate and client landscape.  Now is an ideal time as either a buyer or seller to engage, and I look forward to assisting my current and future clients make the best possible decisions for their personal real estate needs.

And in this week of Thanksgiving, I offer my deepest gratitude to all who have given so much to the Sarasota Community both in all forms of generosity, enthusiasm, bravery and influence to make this the most wonderful place on earth to live, work and play!

The following statistical data is provided through the Sarasota Association of Realtors for properties throughout Sarasota County. The table summarizes what happened in each price segment.