Like the spectacular weather our area enjoys in December and January, the Sarasota Real Estate market is not only impressive, but is also surprising many industry experts with the way it is breezing by previous years’ activity.  News outlets have reported the excitement that came with December’s Sarasota Real Estate sales activity beating the last record set in 2004, and many other statistics and trends support the expectation of continued growth.

At the annual International Builders Show last week, reports of builder confidence returning to pre-recession levels was one of the highlights of the event.  According to housing analysts at the conference, 2014 new home sales exceeded 2013 by 8.8%, but that is still well behind what is considered market balance.  Concerns of a slow return of skilled labor for the construction industry is the most considerable impediment to new home construction meeting demand.  Forecasters believe that a balance between new home construction and consumer demand may still be two years away.

In the Sarasota market, though there is a seemingly endless unveiling of new projects getting underway, the years of inactivity will take some time to achieve rebalance between new supply and buyer demand, both in single family homes and multi-unit projects, and at all price points.

With our highest volume sales months ahead, inventory will continue to be the key obstacle to the Sarasota Real Estate Market reaching even higher sales records.  The tourism market is expected to reach new visitor highs, with record numbers of foreigners coming to Sarasota, and it is no surprise that with tourists come buyers!  Sarasota’s top sales occur in March – June, and with contract-to-sale typically taking 60-90 days, that means that the most contracts are being signed January – April.  I continue to advise indecisive potential sellers that putting a property on the market NOW is the best possible time.

In short, more of the same.  And that’s a good thing!  As I have reported all through the year, the Sarasota Real Estate Market is growing at a very healthy pace.  The steady growth in sales, prices and continuing scarcity of high-quality well-located inventory will keep prices on the rise, though I do not expect any excessive growth in the coming year.  With reports of 800 people moving to the State of Florida every day, a large number of international buyers requesting me to show them property, opportunistic investors on the decline, consumer confidence at its highest levels since 2004, the tailwinds are definitely in our favor.

I believe that sellers and investors who have been waiting for a high pace of price appreciation or have been afraid that if they sell they won’t be able to find a suitable replacement are growing weary.  Though I don’t expect quantum leaps in new inventory, we should see an easing of the insufficient number of available properties.  A+ rated properties will continue to move quickly, but the B units that have been listed for more time and are in the zip code, neighborhood or school district buyers are most seeking, and where sellers are becoming more motivated to get on with their lives, is where I see the most opportunity in the next quarter.

My statement at the opening of this month’s report, “I continue to advise indecisive potential sellers that putting a property on the market NOW is the best possible time,” needs repeating.  As we enter the height of our annual sales cycle, sellers need to remember that it takes time to prepare your property for sale, and in this market rich with eager buyers, this is an ideal time to make your move.

Breezing into 2015 is my title of this year-end report because as we enter our peak selling season, Sarasota is well positioned to continue its steady and sustainable growth.  As noted in the data above, Sarasota does offer reasonable housing affordability in comparison to national averages, and with our extraordinary quality of life, business friendly environment, excellent labor force and educational institutions, and strong recovery of home equity in the regions we attract most of our buyers from, I believe that the coming year will be one of the best on record.

The following statistical data is provided through the Realtors Association of Sarasota for properties throughout Sarasota County. The table summarizes what happened in each price segment. 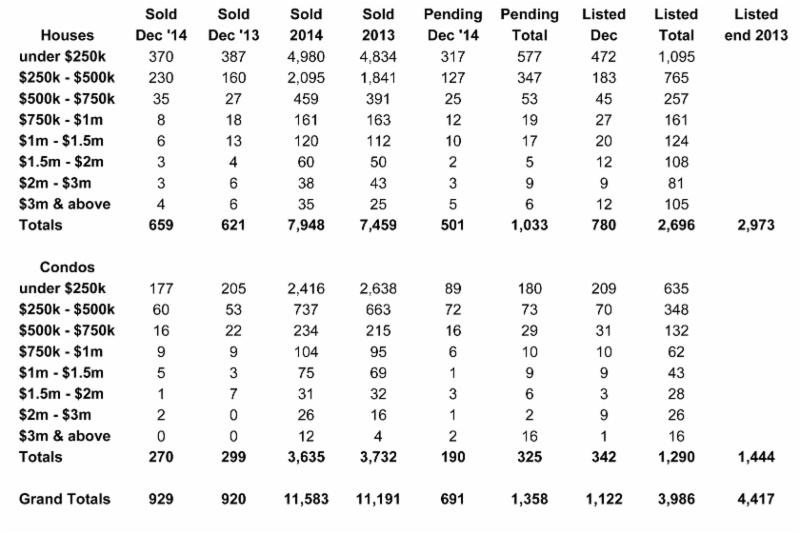