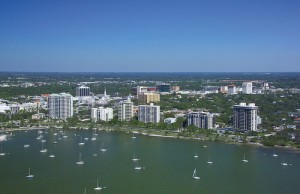 The Sarasota Real Estate Market marked yet another month of growth in June 2017. Though moderate, our region has been able to sustain its momentum while other markets in Florida and nationally are tending to less constancy in sales, prices and inventory.  Last year’s inventory replenishment set Sarasota’s housing market on a course that has allowed for sustained equilibrium, which has contributed to prolonged growth.

April and May’s improvement in pending sales, compared to the same months in 2016, led us to expect a rise in closed transactions in June.  The most notable increase was in the Sarasota condominium segment, with a nearly 5% increase in sales in the month compared to last year. Interestingly, as inventory inched up over the last few months, prices for condominiums have been stabilizing, and the gap between list and sale price has widened slightly, from a high of 95.5% of list price at 12/31/16 to 93.2% last month.

Closed sales of Sarasota Real Estate in June saw the largest growth in the price tiers greater than $600,000.  Single-family homes in the higher price points grew 33% and condominiums approximately 19%.  This is likely due to the fact that lower priced inventory is so thin, that buyers in those segments simply cannot find properties in their preferred locations and within their budgets.

June’s new listings in the Sarasota Real Estate Market’s single-family segment fell slightly when compared to 2016, while condominium new listings increased more significantly.  With an average of around 660 homes sold each month, the growth in inventory that we saw in June is still not equaling the number of sold properties.  New listings of condominiums grew by 50 more units compared to last year’s new listings for the month, but that is not quite keeping up with the region’s average monthly condo sales.  With current inventory at about 4.3 months for single-family homes and condominiums at a 4.8 month supply, we seem to have inched back away from the near-equilibrium that we saw a few months ago.

Real Estate analysts and economists believe that the national housing market is still in a growth phase, likely resulting from consumer confidence related to job and wage growth, the increase in GDP, continued stabilization of mortgage rates, and especially homeowner equity gains.  Experts are projecting these conditions to remain stable, and in turn see ongoing market strength through the months ahead.

Looking at the whole of The Sarasota Real Estate Market and comparing to national and state data, the following are some of the key points that I assimilated from the many resources I review monthly:

It comes as no surprise to my readers that The Sarasota Real Estate Market is heavily influenced by foreign market interest.  And on a national scale, Florida continues to be in the top spot for foreign buyer interest, with nearly 25% of all transactions taking place in our fine state.  Canadian buyers are the leading source of foreign buyers in Florida.

Though the value of the dollar my make some take pause, the fact that real estate prices have escalated at such explosive rates in certain areas of Canada, buyers are feeling they have the equity in their primary residence to consider investing in U.S. real estate.  In general, our key international feeder markets still consider the U.S. and especially Florida, a secure place to invest, despite political and economic factors here and abroad.

The National Association of Realtors just released a report showing that in the 12-months ended March 30, more than $153 Billion of properties were acquired by foreign nationals and recent immigrants, a 49% increase over the year prior.  Also noted in the report was that the median price paid by a foreign buyer is 28% higher than a U.S. buyer.

Michael Saunders & Co. has been at the forefront of establishing international affiliations, and this serves our clients well.  Michael Saunders herself travels many months of the year nurturing these relationships, while at the same time building our brand visibility through speaking engagements and event sponsorships.  Having the depth and breadth of relationships around the globe is one of the most valuable resources we luxury Sarasota Real Estate agents have at Michael Saunders.

Summer selling season in the Sarasota Real Estate Market is powered in part by the broad appeal our region has to the international buyer.  With the reach that Michael Saunders & Co. has, our sellers often have a considerable advantage in marketing their properties.  For example, one of my listings was featured this month on the home page of Luxury Portfolio International’s website.  Properties appearing on their site are said to reach 10 times more qualified buyers, as they have 250,000 visitors to their site from more than 200 countries/territories around the world each month.

As we are at the height of our international visitor season here in Sarasota, and with the pace of pending contracts continuing to grow over prior year each month, I am projecting that in the months ahead The Sarasota Real Estate Market will maintain its steady upward course.

It is always my pleasure to work with friends and family of my valued newsletter readers.  Please let me know if you hear of someone seeking to buy or sell a property in our community – you know you can count on me!